Pearly Dawn, Cornwall, and Botallack Mine, seascapes in oils, work in progress 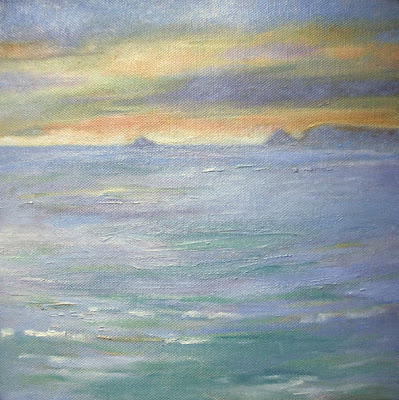 Pearly Dawn, Sennen Cove, Cornwall. 10 inches square, oil on canvas, Vivien Blackburn
A calm sea, pearly colours of lavender, apricot and jade. This one is another oil on a 10 inch square canvas, It was a total nightmare to photograph as the subtle jades kept disappearing and the apricot highlights - not helped by photographing it while it's wet! The sky glows a bit more and there are subtle bits of the apricot sky reflecting on the tips of the swells that aren't being picked up very well in the photo :>(

The last one I showed, of the harbour, has had the lower section of sky lightened and I think is finished.

Botallack mine is moving onwards but large areas are still just blocked in. The foreground has a long way to go and the far cliffs and mine houses but the sea and sky are further forward. The sea is going to be wilder, crashing onto the rocks and cliffs. 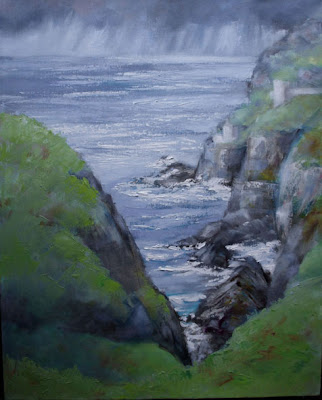 Julie Dunion said…
Hi Vivien, the perspective in Botallack Mine is working brilliantly, the deep green land at the front is really jumping forward, pushing everything else back and creating great sense of depth.
2:39 pm

Unknown said…
It seems that photoshop has some limitations when it comes to color, but thank you for putting the larger images up. I can see your lovely brushwork in the larger views, and follow your thinking process as you develop the layers of color. These are very dynamic paintings - I had to look back to convince myself of the small scale on some of them.
3:31 pm

I'm not sure if it's photoshop or my camera Sue but I find that it's very very hard to bring out the subtle changes of blues and greens
8:55 am

dinahmow said…
Hmmm...I see what you mean about making the cliff too high!
I'm somewhat amazed that you can get all this in a 10" canvas.My hand-eye correlation goes completely out of whack when I try to put a lot in a little!
7:57 pm

and Dinah -this Botallack one is a 16x20 so not such a struggle with detail, which is quite loose really.
6:55 am 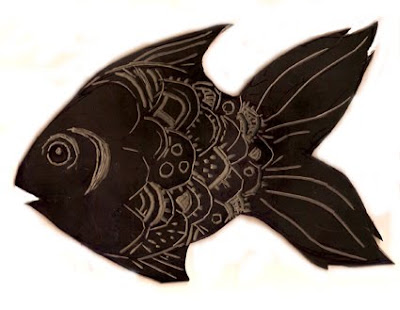 I felt like having a go at another lino print yesterday and got the fish above cut. It's just a fun graphic one, stylised, no observation at all I'm afraid, unlike Jeanette, who is doing a series of gyotaku fishes. Though I did remember from wildlife programmes that fishes are often reddish underneath and silvery on top to camouflage themselves from predators.

Rather than leave the lino the oblong shape, I decided to cut around the fish.
Lino scanned and the image cleaned up


This one is simply playing with transparent layers of colour

This one involved applying a gradient colour in a lower layer, erasing the white background and painting colours on a layer below the fish, allowing the colours to shine through.

I find that simple traditionally printed lino cuts don't suit my work so I'll use oil paint when I have time to experiment with printing this one. Then I'll be able to use a mix of colours. 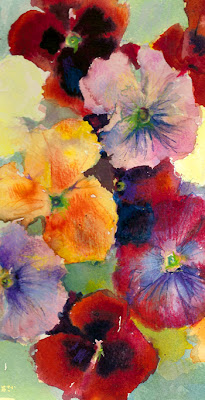 This is a page of watercolour studies of pansies, not intended to be 'a painting', I did a while ago that I came across.

It's a grey rainy day and the light isn't good to get on with the canvasses so I decided to try to pull it together as a composition. I used a bit more watercolour and coloured pencils and cropped it and added the soft blue green background to cool it down a little - the colours felt too hot. The deep dark pansies were really velvety and intense and maybe not the colour scheme I would have set out to use with the orange and pale yellows - but the background helps to knit them together. Bringing the soft mauves into the darker flowers also helped.

I also took another look at a mixed media woodland that was unfinished and worked a little more on that.

It has a little oil pastel in the early stages, watercolour and then coloured pencils. 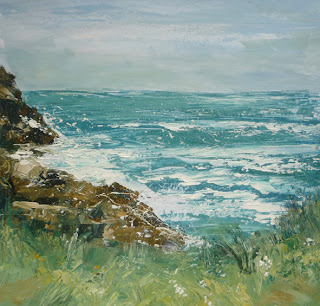 Porthgwarra from the cliffs, Tide in, Watched by a Seal, oil paint, about 11 inches square, not quite finished, Vivien Blackburn
A hazy, windy day, forecast rain stayed away, the tide in so no beach to be seen but a seal swimming out in the surf  kept popping up to look at us.

I sat in a sheltered spot amongst the wildflowers on the cliff  - just the sounds of the sea and the occasional gull - heaven.  Even himself was quietly musing, no talking.

It needs just a little work doing before I'll call it finished.  I often do just a little more when I get plein air works home - I'm looking at them as a painting then without distraction.

the sea seething on the rocks
3 corndered leeks, sea thrift and many other flowers around me
I made it to Porthgwarra without incident this time - last time I ended up having to reverse for about half a mile because I met a HUGE oncoming tanker touching both hedges and totally filling the road, followed by a massive tractor with some sort of …
Read more